The Social Profile Links in the Google Knowledge Graph

But somewhere there’s a Googl Knowledge Graph URI that has the (correctly) extracted facts here. 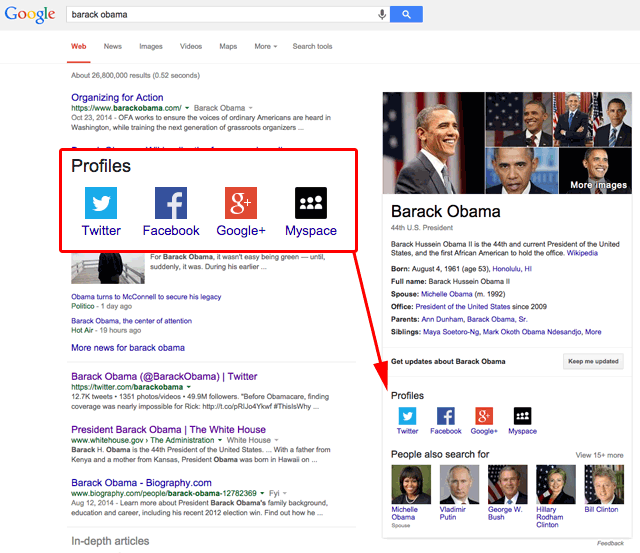 Omi Sido: Aaron Bradley, a question is forming in my head: What if Barack Obama wanted people to see his professional and not his personal Twitter/Facebook accounts?

I know David Amerland said something like “Google essentially is forcing us to become more honest, more transparent”, but from my personal point of view I don’t think it would be beneficial to me if people were seeing my personal accounts.

The Barack Obama example is probably not the best one as I am guessing both his Twitter/Facebook accounts are run on his behalf by somebody else, but do you see a case in the future where people are not happy seeing their personal and business affairs mixed together. Would there be a way to separate them somehow?

It would be interesting to hear Teodora Petkova‘s and Eric Enge‘s (after his recent Dallas presentation on Semantic Search) opinion on this matter.

David Amerland:  Omi Sido interesting question and I am not sure how this will develop but right now, from a purely trust dynamic your professional Twitter account (as an example) would be of zero value to me as a consumer – it would be marketing messages posted by who knows who of your team, following a carefully crafted script.

Your personal account on the other hand adds to my sense of trust in you as a person that produces, in turn, a halo effect in my trust on you as a marketer. Search, at the moment, follows a fairly similar dynamic in its rationale.

Aaron Bradley: Omi Sido Google is trying to provide the best match for its users, which may or may not be the social media accounts you’d prefer users to see.

“… from my personal point of view I don’t think it would be beneficial to me if people were seeing my personal accounts.”

Without going down too much of a rabbit hole, the concept of a “non-personal” accounts in the world of entities is problematic. A searcher querying “omi sido”, a personal name, will want to see a personal account – that attached to the person Omi Sido – or rather the named personal entity Omi Sido.

So what’s a “not-personal” account in this context? If you mean a business account under another name then that’s a named corporate entity that’s a poor match for “omi sido” (one of the reasons I always advise people not to conflate their personal and corporate accounts – e.g. a Twitter handle of @AcmeInc with “John Smith” mapped to the named field). If you mean another personal account reserved for business ([email protected] rather than @OmniSido), then Google is going to struggle with that always because you’ve split your personal identity, though you’re still the same person (a mistake that journalists, in particular, are prone to make) – it’s the equivalent of keyword cannibalization for named personal entities. The Omi Sido that’s interested in gardening (or whatever – sorry, I don’t know your hobbies:) is one and the same person that writes code. Trying to maintain two or more personal identities in the entity-centric world that is Google 2014 is fraught with peril, and ultimately counter-productive IMO.

Oh I think this is a fine example. Google neither knows nor cares whether these accounts are run by proxy – they link them to the person “barrack obama” using just the same logic as they link my social media accounts to the person “aaron bradley”, based on a number of factors including (as per +David Amerland’s point) the observed (trust-building) interactions between each account and other accounts, themselves linked to named personal entities.

And it’s quite right that OFA – a named corporate entity – is not displayed in that social media account list. It’s not appropriate, any more than it would be to have the Twitter account of the Global Real Estate Institute listed in your social media list.

“What if Barack Obama wanted people to see…”

Eric Enge: Omi Sido Google wants to know everything about you, public or “private”. It feeds their ability to serve you better, which increases their ad revenue in the long run.

Teodora Petkova: Omi Sido first thanks for asking me 🙂
Then, as New Age as it may sound, I will risk it 🙂 and say that I think that the clear demarcation between professional and personal in RL is now starting to get blurred and the better the Semantic Web reflects that change the sooner the H2H marketing will come. When I started working at +SEOM I had to have all the possible social profiles. However I was not ready to reveal who I was completely, as I thought social media and SM presence is too much about non essential things, noise, cats pictures etc. I was so to say SM illiterate. So I decided that I will have a professional profile and a personal one. It took me less than a week though to realise that:

1. This is super hard to maintain.

2. This is not sustainable and at a certain point your professional life cannot be separated from you personal one.

I am personally wondering why would you need two identities and what is more why would you want to be in a square – super defined and dynamic-less by your own limits (professional), e.g. powerless to change.
🙂
And last but not least, I know a lot of people who have their several identities and are perfectly fine with this.

In the days when Google Authorship rich snippets were still a thing, I often had difficulties in convincing people to link their Google+ accounts to their professional output.

For example, a journalist working for a Google News-indexed site on subject X, who insisted on creating a separate Plus profile for this site, as she fashioned herself as being a blogging authority on subject Y. But of course she was, and is, and always will be one person creating content in multiple topical realms online. Ironically, I think there was more of a possibility of users discovering her association with subject X because she split her identity in order to “protect” her association with subject Y.

Rinse and repeat, for many individuals.

At the end of the day I think what the determined identity splitters fail to think through are use-cases. That is, search engines, social networks and other data consumers will only surface topically relevant information linked to your identity when it’s, well, topically relevant. So if you work blogging for Ford but your real passion is raising goldfish, you don’t need to worry that your “Ford-ness” is going to surface in a “goldfish-ness” context. And if people really want to find out more about you, you’re not going to be able to hide your “Fordness” unless you don’t expose it anywhere.

Teodora Petkova: Aaron Bradley agree. I will be watching closely the identity splitters :))