“Why would Google show this answer when it is clearly wrong? Is it an Easter Egg? I strongly doubt it. But it does look to be a case where Google got it wrong when it comes to getting answers from third party sources.” – Barry Schwartz 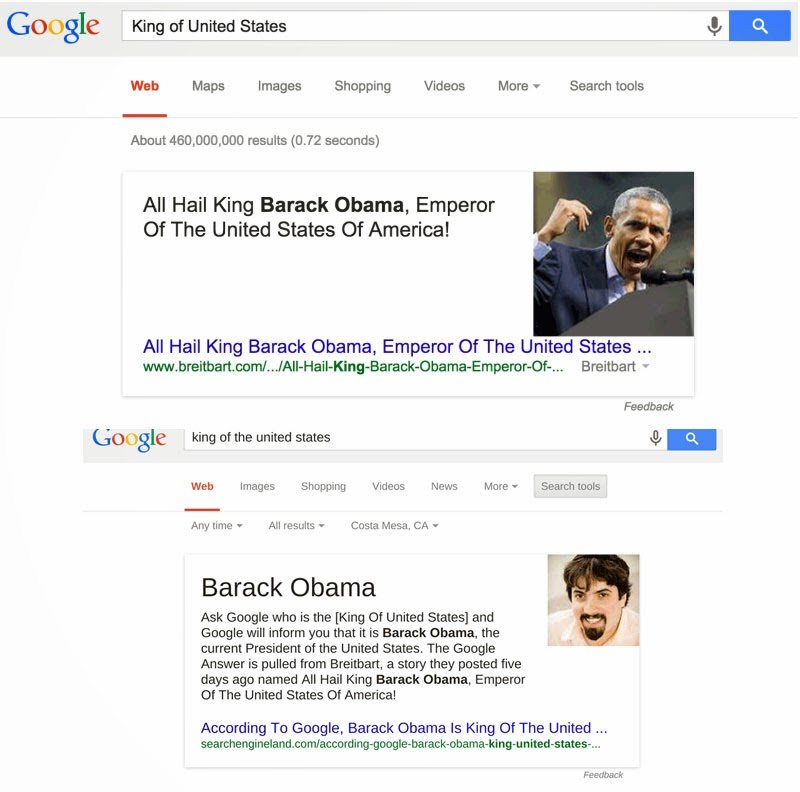 Peter Hatherley: Still semantically relevant of course Omi Sido. This is where context comes into it’s own, I believe, and that remains a major part of the deep learning process that Google is currently engaged in …

Omi Sido: Peter Hatherley I was about to say something similar, but I got stuck in the thinking of how this has happened.

Not a long time ago Google was talking about entity salience. As far as I know names are always salience entities. And the Knowledge Graph has a lot of background information about Barak Obama and the difference between a king and a president.

As you said yourself : The deep learning continues.

Peter Hatherley: Omi Sido the how of the incident is as much a part of the picture too. Appreciate you bringing it to our attention 🙂

David Amerland: Omi Sido this shows the weakness that exists, still, in the veracity component of semantic search.

Peter Hatherley: This is why contextual categorization is so important David Amerland. This is why a simple contextual system that isolates positive, neutral and negative elements could answer correctly. The analysis of the textual content obviously being related more clearly to entities and authority etc.

The truth is that king’s and president’s are intrinsically linked semantically yet there is no King of America.

This would be easily solved by matching these titles against countries as a boolean query.

David Amerland: Peter Hatherley agreed, it shows the complexity of the problem: i.e. what is semantically correct is incorrect at a human understanding level and in this particular example the issue is compounded further by the sourcing of the Barry Shwartz photograph to illustrate it. It shows that Google’s social-mining component is not yet linked quite the same way, in the verification process.

Peter Hatherley: Yes quite true David Amerland it does expose that flaw. The point is that now that this has been activated will it remain part of his semantic profile for the future?

David Amerland: Peter Hatherley no, I suspect it will drop off quite quickly. The checks and controls are in place, though the speed we expect them to work at, is not. One unique element of the semantic web is that results are cached so that new calculations are made on top of new ones instead of starting from scratch each time like we had to with Boolean search. Thus, with time, veracity and the speed at which it is calculated will improve. What we are seeing here are the issues of a nascent technology that has not yet scaled adequately.